You Are Unvaccinated and Got Sick. These Are Your Odds.

Comparing the dangerous effects of three diseases with the minimal side effects of their corresponding vaccines.

By Peter J. Hotez
Dr. Hotez, a vaccine scientist and pediatrician at the Baylor College of Medicine, is the author of “Vaccines Did Not Cause Rachel’s Autism.”

Vaccines prevent diseases, and being unvaccinated carries a risk. Last year, the World Health Organization ranked vaccine hesitancy, a “reluctance or refusal to vaccinate despite the availability of vaccines,” among the top 10 health threats worldwide, alongside Ebola, H.I.V. and drug-resistant infections.

To state it bluntly, being unvaccinated can result in illness or death. Vaccines, in contrast, are extremely unlikely to lead to side effects, even minor ones like fainting.

As vaccination rates have fallen, highly contagious illnesses like measles have resurged globally. For instance, measles is now widespread in several European countries. In Samoa, a Pacific island nation of about 200,000 people, almost 5,700 measles cases have been recorded since September, resulting in at least 83 deaths. Almost all of those who died were young children.

These deaths did not have to happen. In the United States, vaccine hesitancy is contributing to three public health threats: the return of measles, deaths from influenza and needless future cases of cervical cancer.

Some legislators and religious leaders question the safety of vaccines, despite scientific evidence to the contrary. In New Jersey, an effort in December to pass a bill that would end religious exemptions and require students enrolled in any school or college, public or private, in the state to be vaccinated failed to get enough votes; supporters say they will try again in the next few days to pass the bill.

Often, skeptics do not appreciate the vastly greater dangers of the diseases that vaccines prevent.

We accumulated and evaluated data from leading medical journals, the most recent edition of the reference work Plotkin’s Vaccines and the Centers for Disease Control and Prevention to compare the risks of becoming ill with measles, flu or cervical cancer to the minute chances of experiencing side effects from their corresponding vaccines.

The United States eliminated measles in 2000, but in 2019 the number of cases increased greatly, largely because of public resistance to receiving the measles-mumps-rubella vaccine.

When the disease was imported from abroad and spread across the country, unvaccinated children (and some adults) got sick. Outbreaks were concentrated in New York, Michigan, Oregon, Texas, California, Illinois, Georgia, New Jersey, Pennsylvania and Washington. In some or all of these communities there was a rise in vaccine exemptions.

In reality, the risks of side effects from a measles-mumps-rubella vaccination are vanishingly small, especially compared to the devastating effects of measles. 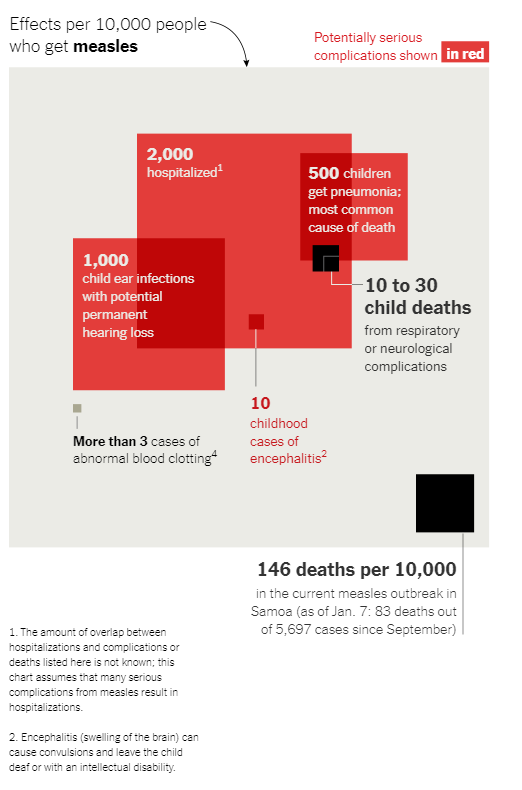 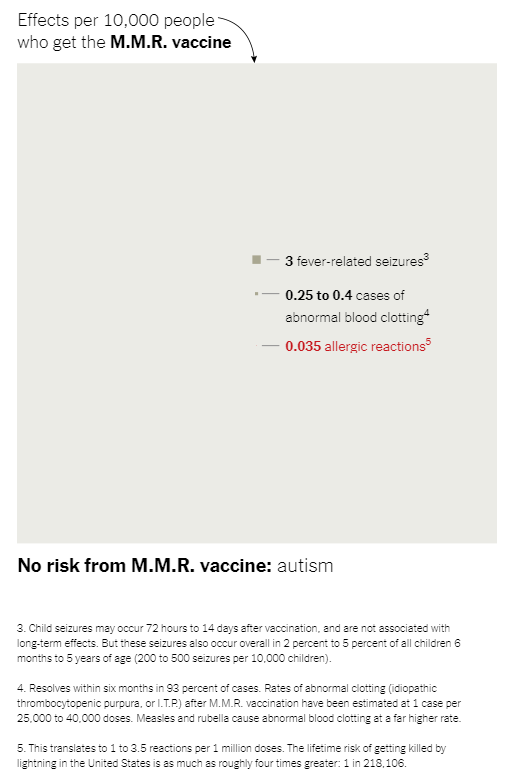 The measles virus is highly contagious, and is often the first childhood infection to return after vaccinations decline. And measles is a serious disease. The 2018-2019 measles epidemic in New York City resulted in 52 hospitalizations, including 16 admissions into an intensive care unit (there were no deaths). About 95 percent of those sickened were unvaccinated, incompletely vaccinated, or did not know their vaccination status.

Moreover, new research reveals that, even when patients recover, the measles virus can suppress the immune system, rendering children susceptible to serious infections like pneumonia and the flu.

In the first nine months of 2019, nearly 1,250 measles cases were reported nationwide, the highest number in 27 years. Among those cases, 89 percent were in patients who were unvaccinated or had an unknown vaccination status.

Why did this happen? Starting in the late 1990s, some parents refused the measles-mumps-rubella vaccinations for their children because of fears that vaccines can cause autism, a central tenet of the anti-vaccine lobby.

This misinformation spread after an article implying a link between the measles vaccinations and autism was published in The Lancet in 1998; it was retracted in 2010 over concerns about the validity of the results and the conduct of the study. Nevertheless, the false claim that vaccines cause autism continued to circulate on the internet and social media.

The truth is that we have overwhelming evidence from at least six studies involving more than one million children that measles-mumps-rubella vaccinations do not cause autism.

Scientists are also learning about the genetic causes of autism and have identified more than 100 genes linked to the disorder. I’m the parent of an adult daughter with autism. Through one of the most extensive genetic tests available, whole exome sequencing, we’ve now identified her autism gene. Evidence points to neurodevelopmental processes leading to autism that begin in pregnancy, well before children receive their first vaccine.

Flu That Sickened 1 in 7 Americans

The 2017-18 influenza epidemic was an especially bad one, resulting in an estimated 45 million illnesses nationwide, according to the C.D.C. An estimated 810,000 people were hospitalized and 61,000 people died, including 643 children. The majority of children who die from influenza have not received the flu vaccine.

Even though influenza ranks among the leading killers of Americans, many choose not to vaccinate, believing that the vaccine is dangerous or that it can even cause flu. (The flu vaccine cannot cause the flu because it contains only inactive or, in the case of nasal spray vaccines, weakened viruses, or is made with proteins from a flu virus.)

The risk of a severe reaction from the flu vaccine, such as Guillain-Barré syndrome (an autoimmune condition of the peripheral nervous system that can cause tingling, limb weakness or paralysis) is tiny, roughly equal to the likelihood of being hit by a lightning strike. Influenza itself can bring on Guillain-Barré syndrome; the vaccine is more likely than not protecting you from this condition. 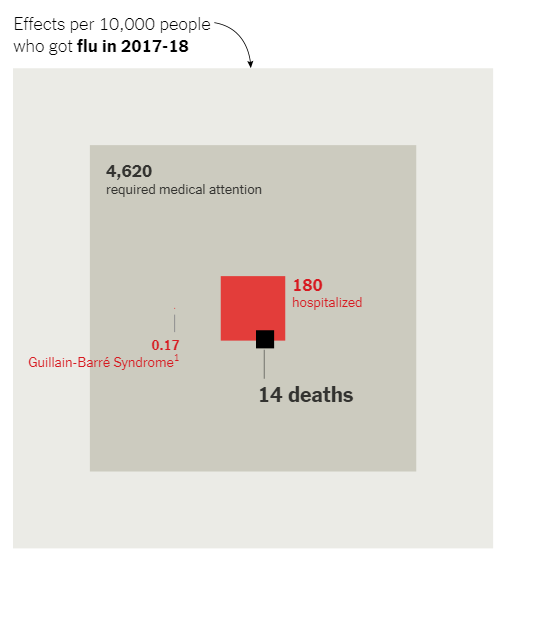 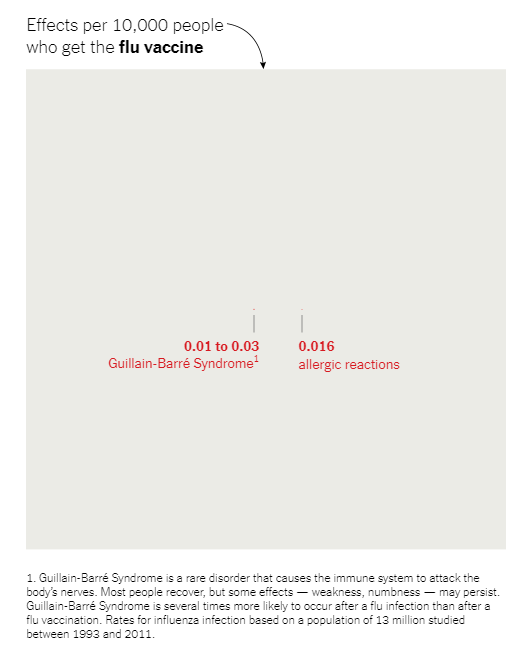 Australia is positioned to effectively eliminate cervical cancer over the next two decades, through a vaccination campaign and increased cervical screenings. The United States is not even close to that goal because the rates of vaccination for HPV, or human papillomavirus, among teenagers has been low in many states compared to other common vaccines. Reasons for this low vaccination rate include cost and lack of access, especially in rural areas.

The HPV vaccine has also been a target of a misinformation campaign, with books and internet posts asserting that the vaccine causes teenage depression and suicide. But there is no evidence of such links. Social conservatives also claim that the vaccine encourages sexual promiscuity, but the evidence does not support this.

The actual risk? Fewer than 1 in 10,000 vaccinated people, mostly adolescents, will faint, perhaps related to fear of the injection. There is also a risk of allergic reaction, as with most vaccines — but again, this is no more likely than being struck by lightning. 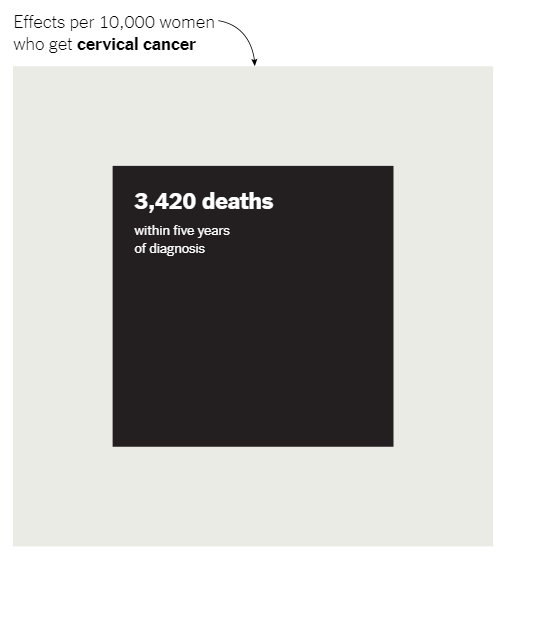 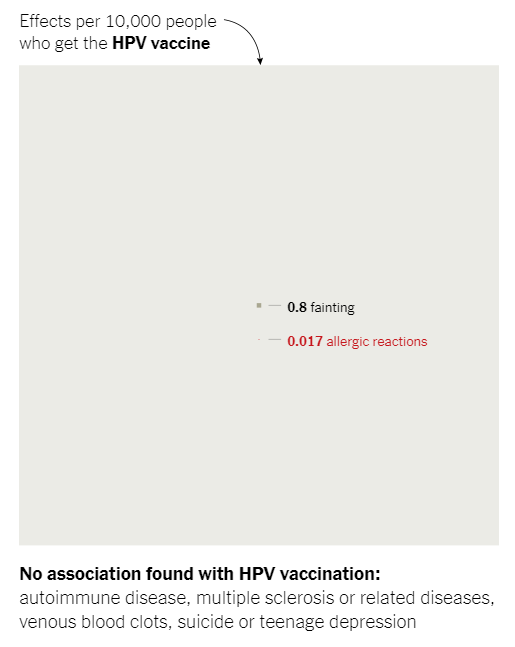 As a vaccine scientist, pediatrician and the parent of an adult daughter with autism, I meet regularly with pediatricians, nurses and worried parents. Parents want to do what’s best for their child, but too often they become the victims of anti-vaccine misinformation campaigns.

In my experience, once I explain how vaccines save lives with minimal risk, it is possible to overcome the fears and apprehensions that parents have about vaccines.

As New Jersey legislators return to work, I hope that they will consider the true risks of religious exemptions for vaccines. Our children’s lives are on the line.

Hepatitis A is a Health Concern in Allegheny County – Stop the Spread!

Promoting Immunizations Across the Lifespan