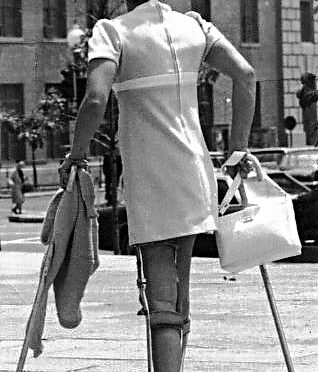 Being the last of the “baby boomers,” I have been able to witness first-hand numerous advancements in healthcare involving treatments, transplants and prevention. However, sometimes our successes become overlooked and then taken for granted. We sometimes become complacent. Few of us remain diligent against the diseases that were once thought eradicated.

In the United States, we are now seeing record numbers of cases of measles and Hepatitis A. We set a record in 2017 for the most number of deaths in children under 18 due to influenza. Not something that we should be proud of…

I remember growing up in the 1960’s and marveling at the lunar landing. My neighbor and I watched the television broadcast that day, in black and white. Eventually, my parents bought a color television and the whole world changed, we now had broadcasts from all three networks and PBS in living color.

I remember one day asking my Dad what were those braces on Aunt Betty’s legs. He shared with me that “she was one of the lucky ones” who survived polio when she was growing up. She needed those braces to keep her steady and help her walk.

I really didn’t understand at the time that my older brother and I, along with many others were the beneficiaries of the work that was done by Dr. Jonas Salk and his team in Pittsburgh. A modern, medical miracle developed here in Pittsburgh that would change the world. An immunization, a vaccine to prevent polio – every parents’ dream was answered. A vaccine to protect their children from such a devastating disease was available. During the 1940’s and 1950’s, over half a million people would die or be paralyzed each year in the United States.[1] Those days are long gone, or are they?

Over the years, there would be further advances in prevention and medical treatment. In our homes, we have seen microwaves become a staple in every kitchen. Hand held computers (today’s smart phones) were the brain child of science fiction writers in the 1960’s and yet, almost everyone has one with them at all times.

We are seeing advances at such a fast pace that we are not remembering or learning from the past. The advances in communications via the social media have caused many people to become leery of vaccines. Some fall under a false sense of security that we no longer need to keep diligent in the fight against long forgotten diseases. Wrong. We must always be diligent in the fight against Polio, Hib, Tetanus, Diphtheria, Pertussis, Hepatitis and so many more that we can help prevent today.

I guarantee that if a polio vaccine was available back when Aunt Betty was a child, she wouldn’t have had to wear those braces. She was “one of the lucky ones…she survived and grew to adulthood.”

Out of sight doesn’t mean that the diseases are no longer a threat.

[1] The history of polio infections extends into prehistory. Although major polio epidemics were unknown before the 20th century, the disease has caused paralysis and death for much of human history. Over millennia, polio survived quietly as an endemic pathogen until the 1900s when major epidemics began to occur in Europe; soon after, widespread epidemics appeared in the United States. By 1910, frequent epidemics became regular events throughout the developed world, primarily in cities during the summer months. At its peak in the 1940s and 1950s, polio would paralyze or kill over half a million people worldwide every year.

Hepatitis A is a Health Concern in Allegheny County – Stop the Spread!

Promoting Immunizations Across the Lifespan